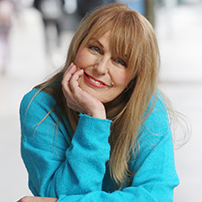 Zvezdana Mlakar is a woman of various roles. Most notably, she is an actress who won the Borstnik Award in 1997, as well as a TV host who experienced the media renaissance with a Zvezda show on national television, in which she is breaking taboos, but at the same time she has become a – prejudice. With her energy, she touches people souls and motivate them to take their lives in their own hands.