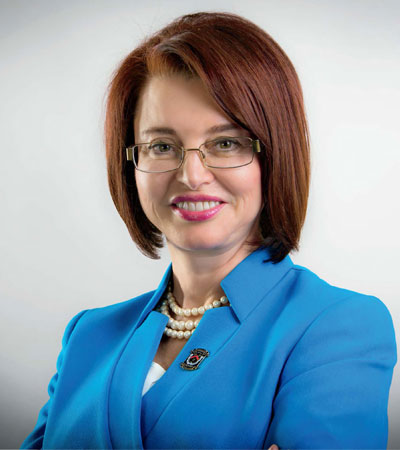 Dr. Zorica Pantić is the president of Wentworth Institute of Technology in Boston and the first female engineer to lead a technological university in the U.S.A. Under her leadership, Wentworth has become a leader in engineering, technology, design & management education and has achieved a university status. Wentworth’s focus on experiential learning and career success produces highly-skilled professionals and well-rounded citizens that fuel the economic growth of the U.S. New England region and beyond. By introducing new STEM and graduate level programs, and investment of close to $300M in state-of-the-art facilities, Dr. Pantić has spearheaded the enrollment growth from 3,500 to 4,100 students and improved recognition and rankings. For example, Wall Street Journal ranked Wentworth among the top 500 schools in the U.S. (out of 4,500) and #3 in the Northeast region for career preparation, while payscale.com ranks Wentworth among the top 8% U.S. universities and colleges for return on investment (ROI). She is a champion for diversity and has worked tirelessly on women’s issues.
Before joining Wentworth in 2005, Dr. Pantić served as the Founding Dean of the College of Engineering at the University of Texas at San Antonio, helping lead UTSA’s effort to become a premier research institution by developing three doctoral programs and increasing research funding tenfold. She was also the Director of the School of Engineering at San Francisco State University and a Fulbright Scholar at the University of Illinois at Urbana-Champaign. She received her BS, MS and PhD degrees in Electrical Engineering from the University of Niš, Serbia.
Dr. Pantić is well recognized as an academic entrepreneur, technology advocate, agent for change, and a champion for diversity, making a positive impact at regional, state, and national levels. She has served on the Governor’s STEM Advisory Council as well as the Massachusetts Workforce Investment Board, Board of Directors of the New England Association of Schools and Colleges (NEASC) and a member of the Executive Committee of the World Association for Co-operative Education (WACE). She serves on the NCAA Division III Presidents Advisory Council and is on the Board of American Association of Presidents of Independent Colleges and Universities (AAPICU). She has also served in leadership roles in many professional societies such as the Institute for Electrical and Electronic Engineers, American Society for Engineering Education and American Council for Education. She has published more than 80 journal and conference papers and has served on a variety of the National Science Foundation and National Academy of Engineering panels. She was recently elected to the Serbian National Academy of Engineering.