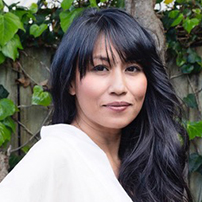 Yvette Sitten is a holistic entrepreneur, goddess alchemist & maker of magical substances. Her domain is the world of alchemy, where elemental energies and sacred plant knowledge are fused into a synthesis of the ancient/modern future template – a vision of ancient knowledge re-awakening to new technology and human capabilities.
Sitten’s range of alchemical oils have garnered users and rave reviews from all continents of the planet. Her expertise in the vibrational healing modalities under the Aurora Alchemy banner have led to speaking engagments and workshops in major cities globally as well collaborations with organizations and creatives.
Her deep insights into the power of nature and its untapped applications have resulted in a range of 22 chakra oils, featuring a unique spectrum of world goddesses and divine feminine role models, known as the Aurora Alchemy goddess oils. She is now releasing her latest range of remedies, based on the butterfly realm, to support metamorphosis and transformation. Her new range, the Monarch Essences, are the first in the world to encompass and work with the magical spirit of the Monarch butterfly.
Sitten holds anointing ceremonies all over the world at sacred sites to lead groups into the conscious healing of the planet. Some of these spaces are Egypt, Cambodia, the UK, Ireland, New Zealand, Japan, Hawaii, Malaysia, Singapore and China. Sitten documents, films and records the awakening energies of each site.
Working with the memories and forgotten histories of temple sites throughout the ancient cultures, Sitten’s work explores the intersectional crossing point of sacred art, living monuments and the importance and power of nature and healing ceremony to restore consciousness and site signficance to both places and people.
Sitten’s journalism and documentary-making has prepared her to apply her background of research and story-gathering to the realm of spirit, intution, consciousness and transformative natural medicine.
Her journalism career began as a reporter with the Sunday Times UK. She also trained with the legendary left wing publication Red Pepper and at the iconic Harpers Bazaar UK. She specialised in news and current affairs at Mediacorp Singapore, later launching Singapore’s first feature shows on entrepreneurship, the arts, food and culture.
In 2000, Sitten took over the helm of CNBC Asia’s pioneering female leader show, Asian Working Woman, the first show in Asia to feature the achievements and concerns of female economic movers and shakers, women of power in Asia and business leaders. The show broadcast across Asia and the Pacific, and was featured in Time Magazine Asia as a signal for a growing movement of women’s economic influence in the world.
It was during this pivotal time that many of the ideals and initiatives of Sitten’s current work in women’s empowerment and women’s influence in the world of economics were seeded. Sitten also gathered statistics backing up her vision of women stepping up to leverage their positioning in the world, through innate female power rather than just competing with the masculine.
Her series on Asian women artists, “Spirited Faces”, a 4 part series on women artists in Asia, was backed by Arts Central Singapore and was the first dedicated show to ever feature Asia’s female artists and their work. Sitten wrote, presented, produced, conceptualized and executive produced the series alongside organizing an art exhibition of the works featured.
Sitten also worked for leading publications and channels such as National Geographic, Discovery and Time Out magazine. The documentary she co-produced and co-wrote, “Secrets of the Samurai”, was the first Asian documentary to be produced alongside a Hollywood blockbuster “The Last Samurai” (2003) with Tom Cruise.
In 2005, after her spiritual awakening with the Goddess, Sitten has held workshops and retreats all over the world reconnecting people and places to the divine feminine. She holds several retreats and workshops around the world each year. (auroraalchemy.com)
Her recent collaboration with New Zealand social practice pioneer artist Tiffany Singh (2017 till present) has resulted in the emergence of a new body of work, the Rainbow Alchemy Lab, where ongoing enquiries on wellbeing, natural medicines, traditional healthcare, sustainability and urban city engagement are a key focus, to bring healing to cities, spaces, people and the collective human family. In 2018, in collaboration with Te Papa Museum and Tiffany Singh, the first Arts and Wellbeing weekend was held, with workshops on scent, nature, mindfulness and light.
Sitten’s passion is to examine the hidden, unknown, quantum aspects of the feminine re-emergence into the portals of power and authority. The spaces in which women can make a profound difference because of our unique feminine aspects. She sees a powerfully energizing and profound time coming where women will reconnect to their divine feminine wisdom and fully remember their role, power and truth after 10,000 years of patriarchy.