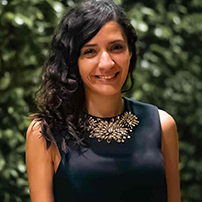 Yasmine El Baggari, a native of Morocco and California based, is the founder of Voyaj, a global platform that connects people from around the globe for one-on-one meaningful exchanges to foster global understanding and peace. After traveling alone to over 40 countries, all 50 U.S. States and a guest in more than 200 homes, the hospitality and open-mindedness of the people around the world impacted her greatly and inspired her to bring her own experiences to the world.

Every day, Yasmine is committed to creating a safe environment where the exchange of ideas and stories will result in mutual respect and our ability to embrace our differences, to empower each other to become citizens of the world committed to a healthy, peaceful planet.

For the past four years, Yasmine’s reach includes research at Harvard University, and the U.S. State Department as a Youth Moroccan Ambassador to the United States. Her work has appeared in BBC, National Geographic, NPR, Forbes, and the Huffington Post. Yasmine has also received the Royal Air Maroc Award from the African Studies Association, Glamour Women of the Year Microsoft’s Made Achieving Award, Hampshire College’s $60K Award for Entrepreneurship and Innovation, two Ingenuity Awards and a number of others. Recently, she was invited to the White House as one of the 100 Most Influential Travel Bloggers, and on Forbes 30 Under 30’s list as one of of the most inspiring and promising entrepreneurs in Africa.

Yasmine is simply on a mission to bring back openness, curiosity and empathy in our world.