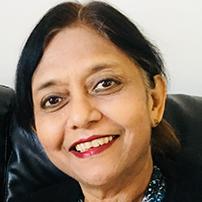 Prof. Yasmeen Haque completed her undergraduate studies from the Department of Physics, Dhaka University in 1976 and obtained her Ph.D from the University of Washington in 1984, where she also did her post-doctoral work.

She returned to Bangladesh in 1994 to join the Department of Physics at Shahjalal University of Science and Technology, Sylhet. In addition to teaching departmental core courses, she also served as head of the department, the provost of female dormitories for two terms, and dean of the Faculty of Life Sciences. During her tenure, she developed a research group of the relatively new field of Nonlinear Optics (NLO) as it offered the scope of conducting interesting experimental physics.

With World Bank and Bangladesh government funding, she set up a state of the art NLO lab in 2011 and her group started studying fundamental properties of nonlinear optical materials. In 2016, she set up a modern Nonlinear BioOptics Laboratory. The prime interest of this lab is the detection of cancer biomarkers and the initial findings have already resulted in the submission of a provisional patent in the US and in Bangladesh. Yasmeen Haque has retired in 2017 but is still associated with the Department of Physics as an active researcher as the head of the research laboratory.