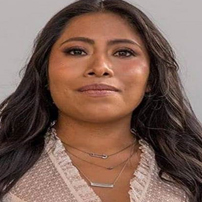 Recognized for her participation in the Rome film, in which she plays Cleo, a work directed by Alfonso Cuarón in 2018. Time magazine classified her as “the best performance of 2018” Aparicio became the first indigenous woman and the second Mexican woman in being nominated as best actress for the Oscar award.