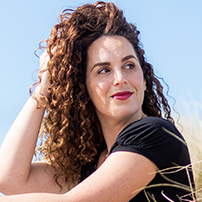 Yaela Raber is a no-nonsense success & business coach, author and speaker.
Through her business THE C.E.OHM she supports game changers and change makers in turning their sucks-ess into success and creating a life and business that allows them to be unapologetically ambitious AND uncompromising in their quality of life. It’s time to go big AND go home!

Who is this woman preaching to us about our screwed-up vision of success and living a fulfilling, holistic life? It’s Yaela Raber. And while only being 35 years old, she’s seen ‘it all’ in her lifetime. From studying abroad at 16 to launching, building, running – and selling – a multimillion-dollar-business. And from becoming a young mother to ending a 15-year marriage. Through fuck-up’s and highlights and falling flat on her face to falling into new opportunities – she gained expertise most people only get at the end of their careers. She speaks the language of the new generation of entrepreneurs who are now going through the same struggles. And she serves them her advice on a silver platter of realness. A plate she wished she had herself.

ABOUT YAELA
Yaela Raber always had a certain drive within her. At the age of 16, this drive wants to get her on her own two feet as soon as possible. Though born and raised in Amsterdam, Yaela has Israeli roots. She moves to Tel Aviv and goes to university – being the youngest in the dorm. At 17, she moves back to The Netherlands to finish Hotel School in The Hague and Amsterdam. After her internship at a hospitality mystery guest company, she works her way up to General Manager of The Netherlands at age 19. Mövenpick Hotels notices her and offers her a job to do a huge pre-opening project. An amazing experience that ends up kickstarting her career. After this project, she spends three years at the Marketing and Sales department of Radisson Blu. In these years, she marries and has her first baby. Radisson offers her the position of Director of Sales and Marketing, but she turns it down. The hospitality industry is too grey and conventional for her. So, she decides to stir things up.

From kitchen table to multimillion-dollar business
From her kitchen table, she starts her own business. Figuring it out as she goes. Her first big project is the launch of Amsterdam Bar Week, which leads to Rotterdam Bar Week. During this project, she gains a vast network in the food, drinks and bar industry. Several bar owners ask her: “Why don’t you do this for us year-round instead of just this one week?” Her business hit the ground running. Working from one project to another and growing day by day. And one day, she realises this business evolved into an agency. While this story makes it sound effortless and natural, the real ride only just began. Yaela, like every other entrepreneur, doesn’t know what the hell she is doing. She has big ups and even greater downs. She learns things the hard way by falling flat on her face many, many times. But she keeps on grinding. Head down and keep going and going. It gets her very far, but also very far away from herself. Her lifestyle is unhealthy and unsustainable. Emergency surgery as a result.

From workaholic to tree hugger
Yaela knows she has to do things differently. So, she goes on a yoga retreat on Bali. As cliché as that might sound, it wasn’t for her. She is not the type to go on yoga retreats, to say the least. The people around her think she’s losing her mind. But luckily, she does it anyway. She moves away from work and realises she needs to prioritise her life. All of her life. It’s a turning point that shifts something inside her. While seeing things clearly, she decides she needs to step away – quite literally. Six months later, she and her family board a plane to move to New Zealand.

Stepping away is a good thing. But running and scaling a business remotely while building a life from scratch is a whole new challenge. The business she built over the years was slowly getting away from her. Until the point, it no longer felt like home. But just like kids, a business needs to learn to stand on its own. Yaela realises she is a builder and a creator. And that the business entered a new phase in which that part of her is less expressed. Her business deserves someone that thrives off this phase. So, she sold it. And while it hurt like hell, it also led her to this new-found passion to coach others that are going through the same while helping both them and herself to build and create new things.

Yaela’s indestructible drive came at an early age. She moved from Amsterdam to Tel Aviv at age 16 to study abroad at university. Later, she finished Hotel School in The Hague and Amsterdam and worked her way up fast in the hospitality industry. After running big-shot projects for hotels such as Mövenpick and Radisson Blu, getting married and having her first baby at age 24, she decided to shake things up.

From kitchen table to multimillion-dollar business
She stepped away from the grey and conventional companies and started her own business from her kitchen table. From starting up Amsterdam Bar Week, gaining a vast network of clients to hiring her first employees – Yaela was hustling. Her kitchen table dream grew into a leading hospitality storytelling agency. During this wild ride, she had big ups and even greater downs. But she kept on grinding and grinding. It got her very far, but also very far away from herself. Her lifestyle was unhealthy and unsustainable. Emergency surgery as a result.

From workaholic to tree hugger
Things needed to change. As cliché as it might sound – Yaela went on a yoga retreat in Bali. As someone living on adrenaline and caffeine, she was not the type to do this. To say the least. Though on this retreat, her life completely changed. Moving away from work, she realised she needed to prioritise her life. All of her life – both professional and personal. Fast forward a couple years: Yaela now lives in New-Zealand, adapted a new lifestyle and sold the company she built from scratch. It was a tough decision. But the company was ready to stand on its own feet. And as a builder and creator, she was ready for a new challenge. This led her to this new passion; to help others build and create through her own expertise.

Even though she’s only 35 years old, Yaela gained expertise most people only get at the end of their careers. She speaks the language of the new generation of entrepreneurs who are now going through the same struggles. And she serves them her advice on a silver plate of realness. A plate she wished she had herself.