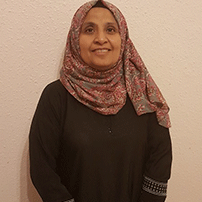 Waheeda is summed up in the following: responsible, hard work, and efficient so that standards are met, the charity’s resources conserved and promises delivered. Waheeda’s talent lies in bringing order, structure and completion: All this is done to ensure the ethos of service is preserved.

• Waheeda restarted a camp for Boys only that had been previously shut down for over 5 years. With some support from the past team, she built and sustained teamwork by talent spotting young mentors. In 2014, there were only 16 campers. In 2017, there were over 90 campers.

• Waheeda co-created with her team a bespoke development programme and in 2015 she launched a boys and girls camp. The camp has now become a pathway for the community to engage the youth by empowering them to lead.

• Waheeda introduced the concept of mantras for the Camp and values through modeling of behaviour. The mentors were trained to use the mantras as a process of change. One of the mantra was “The mind that has the question has the answer…” At the age of 11-13, young people experiencing such a camp started the journey of transformation.

• Realising there was an emerging disconnect between the seniors and the youth, Waheeda took the risk to have the camp also host the seniors. The outcome was a spark of reconnection not felt since.

Connecting with love and integrity

• Against all advice, Waheeda, as the head of the camp, shared her vulnerability to parents who were sending their children, that she had failed her A Levels and left school with 5 GCE. She insisted she would not recruit mentors as they were previously recruited (from the Top 10 University’s in the UK) and insisted on diversity in the selection process. Her first question to any new potential mentor was “Please tell me about your failure and what did you learn from it.”

• A recent experience led Waheeda to reassess her approach at the camp. An encounter with a camper left her feeling whether she had done the right thing and could she have done it differently. Waheeda decided to connect with the camper and the mother with love and integrity only to realise that the camper was sent to the camp by the Universe to be Waheeda’s teacher. As a result, Waheeda has changed her whole approach to training by utilising the mentors to do the facilitation.

• First member appointed by the President of the Wessex Muslim Community to the Executive Committee where Waheeda’s responsibility was to ensure women of the community were engaged. Waheeda delivered this by engaging the men in taking care of the children while women attended pampering sessions once a month.

• Waheeda organized breaking of fast programmes at the local Islamic centre that until then always had programme where men and women were segregated. She did that by ensuring all the tempting savoury dishes that women had brought were left for the women folk to eat. Men were only left with the main dish. Women, as they went home, shared with husbands what they ate. Soon, the doors that were used to segregate opened and as they say, the rest is history.

Collaborating for the greater good

Trusting and being transparent

• She was the first Woman in the international chapter of the Khoja Shia Ithna-asheri Muslim Community charity to be elected to head the Electoral Commission. Five years previously experienced a constitutional crisis 5 years earlier. Four male candidates were nominated for the role. They all declined. Despite being given a “poison chalice”, Waheeda took on the task. The election took place smoothly. In her Conference report on the election process, she shared what was previously never done: a risk assessment report. This report highlighted 3 risks to the organisation regarding the existing processes. The same 3 areas of risks had been twice previously identified and not actioned by the organisation. By using the “Risk Matrix” she identified the existing process having the potential to have “reputational risk” to the organisation with a high likelihood of it occurring. The report was accepted and a new male member of the community was elected to now lead the process of change in the electoral process. Waheeda decided she still wanted to be part of the process and ensured she is part of the Electoral Commission. Transparency cost Waheeda the post of the head of electoral commission and it is a value that would never be sacrificed.
Her educational achievements:-
Waheeda credits the Muslim Council of Britain’s Leadership Development Programme to help her unlock her own potential. Since then she has become an MBTI Step 1 Practitioner. In 2016, Waheeda graduated with a BA (Hons) in Leadership, Business and Management from the University of Portsmouth where her dissertation focused on why volunteers take on leadership positions in a Muslim faith based organisation.