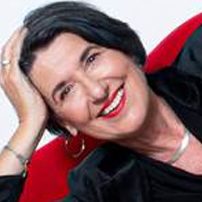 Vréneli Stadelmaier MSc., who has a master in business administration, is an author, professional speaker, feminist and career coach. After her graduation she worked in several managerial positions. In 1999 she started her first business, together with her former husband, in executive search in investment banking. In 2007 she started SheConsult out of frustration that it still will take so much time before women face an equal level playing field in work.
She wrote the bestseller “F*ck that Insecurity” (Published in English under the title: “Sure she can, Crush this Insecurity”) and “A Smart Girl is Prepared for Her Future, Survival Guide for Young Ambitious Women” that prepares young women for the challenges they may face the first 10 years after their graduation.

Vréneli is director and founder of SheConsult, a nationally operating training & coaching agency for highly educated women, with 22 affiliates in the Netherlands. It’s proven that women are different than men and face different problems, then men do. So women have different needs in training and coaching than men, and the trainers and coaches of SheConsult have the knowledge and the experience in supporting women in those fields.
Vréneliregularly holds lectures at organizations, network events and in theaters. She is a regular guest in Dutch media and an active vlogger. In 2015 Vréneli was awarded the prestigious Joke Smit Award for her work on gender equality and women’s emancipation by the Dutch government.