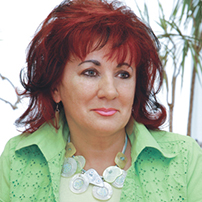 Adviser to the President of Republic of Slovenia on Human Rights, Humanitarian Affairs and Social Policy, former Human Rights Ombudsman.

In addition to her professional work at the Prosecutor’s Office, she has participated throughout in the formation of new systemic measures, legislation, implementing regulations and in expert evaluation of their effectiveness. She has cooperated with the Ministry of Justice, the Ministry of the Interior, the Ministry of Education, Science, Culture and Sport and the Ministry of Labour, Family and Social Affairs (preparation of the Family Violence Prevention Act).
She has been also very active as a lecturer. She has lectured on the post-graduate paediatrics course at the Faculty of Medicine in Ljubljana, to students at the Faculties of Law and Criminal Justice and Security in Ljubljana, at seminars organised by the Chamber of the Republic of Slovenia for Private Security, the Nurses and Midwives Association of Slovenia, the Slovenian Intellectual Property Office, the Social Chamber of Slovenia and others, to trainees at the Ljubljana Higher Court, police officers, criminal police officers, in kindergartens, primary and secondary schools, parents, teachers and educators in libraries, houses of culture and at third age universities. She has organised and implemented numerous seminars within the Association of State Prosecutors of Slovenia.
She was one of the initiators of ‘Advocate – a child’s voice’, a project which has been operating in cooperation with non-governmental and governmental organisations within the framework of the Human Rights Ombudsman of the Republic of Slovenia since 2007. She has worked as a member of the project group and a lecturer at annual training sessions of advocates.
She is active in the education of volunteers in non-governmental organisations (Slovenian Association of Friends of Youth and Slovene Philanthropy). She has been actively cooperating with the Slovenian Institute for Psychotherapy in Ljubljana, social work centres, safe houses, maternity homes and juvenile institutions.
She has also been active in the Association of State Prosecutors of Slovenia, acting as its President between 1999 and 2005. In 2003, she initiated the foundation of White Circle of Slovenia (Beli obroč Slovenije), an association for aid to victims of criminal acts. She was the President of the association until her appointment as Ombudsman.
She has initiated the establishment of two charity funds: the Flame of Goodness (Plamen dobrote), a fundraising campaign for voluntary contributions to help victims of violence, abuse and ill-treatment, and Hippocrates (Hipokrat), a fund for collecting donations for the purchase of special medical equipment, orthopaedic devices, for shortening waiting periods for selected medical services in Slovenia and for examinations of blood to help patients who need bone marrow transplants. Her bibliography is vast; she has written ten books in the last ten years, the proceeds of the sales going to charity.
She still is a columnist at the IUS-INFO legal information portal since 2007, and occasionally writes on legal issues for Pravna praksa magazine. She was selected as one of the ten most influential lawyers in the Republic of Slovenia between 2006 and 2013 within the IUS-INFO legal information portal.
She was the Ambassador of Volunteering in the Republic of Slovenia during the European Year of Volunteering, and in 2012, she was the Ambassador of Active Ageing and Intergenerational Solidarity.