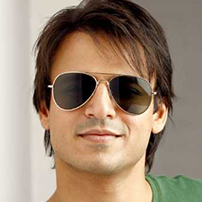 Vivek Oberoi was born on the 3rd of September,1976 and attended Mayo college in Ajmer. At an actors’ workshop in London he was spotted by none other than the director of NYU who (unsurprisingly) whisked Vivek off to New York, where he completed his Masters Degree in film acting. Back home in India Vivek worked as scriptwriter and bought his first car with the money he made from that. But the charmer’s big break came when noted filmmaker Ram Gopal Varma offered Vivek a role in his gangster flick, Company (2002). Quite an unusual entrance for a debutant in Bollywood, because the norm for young actors is to play good lover boys till their place in Filmdom is secure. Not Vivek. Apparently, Ram Gopal Varma was having second thoughts about casting Vivek in Company because he thought Vivek looked too cute for a gangster – and told him so. Vivek, not to be outdone, went to the slums of Mumbai and did his homework and a couple of weeks later barged into Varma’s office dressed as Chandu the gangster, swung his feet up on the table, and landed the contract pronto.
From there the road went uphill. Vivek’s immaculate performance in Company – in which he starred opposite Bollywood Big Bad Boy Ajay Devgn, Miss Bolly Manisha Koirala and the granddaddy of Malayalam Cinema, Mohanlal – was more than enough to get the media singing Oberoi’s praises. Next in line was the psycho-thriller Road (2002) (opposite Company co-star and co-newcomer Antara Mali), Dum (2003) (which sank without a trace – opposite Dia Mirza) and the next big catch, Saathiya (2002), opposite Rani Mukerji.