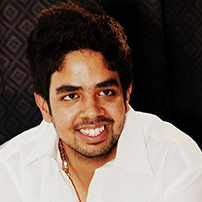 Vishnu Vardhan is an Instructional Designer by profession and a social entrepreneur by passion. As the co founder of Indian Superheroes(ISH), he has enabled over 800+ organic farmers to sell their products to businesses and customers directly, and improve profits by 184% on average. ISH is also enabling the transition of over 2400+ farmers to an organic way of life. ISH has a product portfolio of over 120 products – specializing in organic food, beauty essentials and Zero Budget Organic Farming Workshops. While working with the organic farmers, he began to understand that widespread deforestation is one of the primary reasons behind severe droughts and floods that caused heavy losses to
farmers. Investigating the cause for deforestation gave birth to his second venture – Plantcil – ecofriendly pencils with one intention – to curb massive deforestation that impacts the environment and causes climate change. With a focus on the current generation Superheroes – the farmers, and the future generation Superheroes – the kids, Vishnu hopes that Indian Superheroes and Plantcil will go on to spur a movement that people will join hands with. The silent, organic & ecofriendly revolution has just begun.