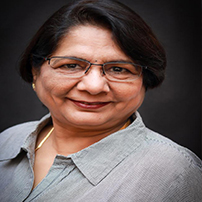 Vinita Jain was born to a Hindi-speaking family in Lucknow, Uttar Pradesh, India. The family later shifted to Jaipur, Rajasthan and she did her schooling from Maharaja School, Jaipur. Ms Jain received a Masters degrees in Political Science from The Rajasthan University.
Career
Beginning her career in Jaipur in the late 70’s, Ms. Jain started teaching Primary School children while pursuing and learning the nuances of the Beauty Business and Salon Management from Jaipur.
Post her marriage to Late Mr. Rishabh Jain in the early 80’s she moved to Madurai, Tamilnadu and in the year 1987 set up her first Beauty Parlour in a small room at her residence, Vinitas.
Vinitas Beauty Parlour (1987)
When life threw curveballs at her, she remembered who she was and the game changed.
She believed in hard-work, persistence and not forgetting her duty – A duty that slowly transformed into her Dream. A dream that slowly changed from protecting and providing for her family to realising her true potential as an entrepreneur and making not just a difference in her field of work, but laying thick foundation stones for generations of women to come. To show them that LOCATION (Madurai- an uber-conservative town), TIME (early 80’s) and CHOICE of the line of business (the Beauty parlour business which was frowned upon) don’t make a difference if you are passionate
and simply believe in yourself.
The next big milestone was achieved, when along with her husband Late Mr. Rishabh (who by then was actively involved in the Administration and New Initiatives), set up a 2500 sqft Salon at K K Nagar, in Madurai, in the year 1998.
This was the biggest and the first of its kind in South Tamil Nadu. Vinitas Day Salon and Spa – 2003(-Present)
Her son Abhineet joined them shortly and needless to say, sky has been the limit! Together, they introduced the concept of Unisex Salons to Madurai and established multiple outlets within South Tamilnadu.
They also have ventured into Training(Beauty and Allied courses), Manufacturing (Beauty products), Software (ERP for Salons), Furniture (Salon related) and Construction.
What started in small room of her residence has turned out to be the biggest adventure of her life. Vinitas Day Salon and Spa is today a household name in South Tamilnadu.
They say Empowered Women Empower Women, Ms. Jain is a classic example. She has not only employed a few hundred women at her own outlets but has also paved way to the thousands of women setting up small beauty parlour set ups that are mushrooming in every nook and corner of Madurai.
Awards and recognition
In 2019, Ms Jain was accredited with LifeTime Achievement Award for her
contribution to the beauty industry in Chennai. Other awards she has won are
1993 – Best Hairstylist, Tamilnadu Tourism Department
1994 – Best Hairstylist, Tamilnadu Tourism Department
1997 – Best Beautician , Madurai
1998 – Best Beautician , Madurai
1998 – Best Beautician , Madurai
2005-2016 President, South Tamilnadu Beautician Association(11 years)
2001-2004 Chairperson of Madurai Region at All India Beautician Association
1999-2001 Chairperson and Organiser Miss Temple City
PRESENTLY – President, Jain Samaj Mahila Mahasamithi, Madurai
Ms Vinita Jain married Late Mr. Rishabh Kumar Jain, entrepreneur, in 1980. Ms Jain has a Son (Abhineet Jain) and Daughter (Reshu Jain Patel).While her son is actively involved in Vinitas Day Salon and Spa, her daughter is married and works at Vapi in Gujarat. Blessed with 4 grandchildren, and a hands- on approach at Vinitas Day Salon and Spa, there is never a dull moment in Ms. Jains life.