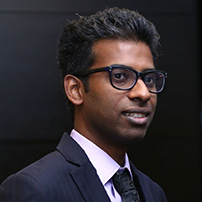 Vikram Philip Rajkumar is an Economics Graduate from St. Stephen’s College, Delhi with a Master’s Degree in Sports Development from the University of Gloucestershire, UK. He has over 11 years of experience in the football industry with a special focus on Grassroots Football. Vikram started his career in Football during his final year at St. Stephen’s, working with a Football Club in Delhi. He went on to work on multiple Grassroots Football Development projects before heading to the UK to pursue his Masters in Sports Development. He spent 3 years in the UK working as a football consultant. He returned to India to work on Football Development projects in an effort to help develop the football eco system in the Country. He went on to successfully establish various grassroots football programs and co-founded a professional I-League Football Club based out of Hyderabad. Vikram currently is the Head of Grassroots & Partnerships for Northeast United Football Club in the ISL. In less than 1 year he has set up a residential Academy for the Club and built partnerships in different regions of the Northeast. Vikram has a keen interest in projects which use sport as a tool for social change