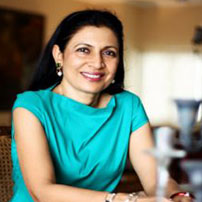 Vidya was born into the erstwhile Princely state of Vijayanagaram, in Andhra Pradesh in Eastern India. She was educated at the Presentation Convent, Church Park and later at Stella Maris College at the University of Madras.¬ Where she received a BA in English Literature.

Vidya has been the President of IWA (International Women’s Association) a premier ladies’ organization, a Rotarian and a Member of FLO. She was also the President of Soroptomist International, a charitable organization. She has brought to Madras several leading personalities of India, in the fields of conservation, literature, film, sport and TV, as guest speakers.

She is a Patron of the Karunnai School for destitute, mentally disabled children, for whom she has organized several fund-raising events.

Passionately involved in sports and fitness, Vidya captained the Madras University Women’s Tennis team and even today, continues to train and exercise regularly, by jogging, walking, weight training, tennis, horse riding, swimming, bicycling and yoga. She has been participating in Masters Swimming Championships at the State and National Levels, winning several gold and silver medals.

She has been a fitness columnist for the Economic Times – The Madras Plus, Eve’s Touch, a Chennai based Magazine, Chennai Frappe, Apollo life – a health magazine, B_ Positive and At A Glance. She has also contributed a column “In Conversation with a Living Legend”, to the Indian Express and Restaurant Reviews and several guest columns in other publications and newspapers.

Vidya Singh has been profiled in several leading Indian Magazines and newspapers and has been the Brand Ambassador for ACE, Apollo Hospitals Centre for Excellence, a women’s wellness center. She has been featured in Vogue in the list of India’s 50 Best Dressed in the June 2013 issue.

She is a partner in Sumyog, a wedding planning company based in Chennai and has organized several weddings in Chennai and other places in India, since the past twelve years. She also runs an event management company that handles company and product launches, book launches, and fashion shows.