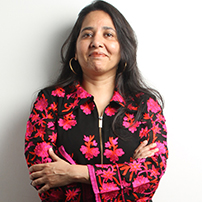 Vibha Singh is a freelance writer. An MBA from the American University in Cairo, (AUC), Egypt, and an ex-advertising professional, she now writes for Hindi films and television. She has written story, screenplay, dialogue and lyrics for over fifteen films and ten TV serials. Her film Dharm won the Nargis Dutt National Award for the best feature film on national integration (2007), and the Swarovski Trophy for the best film at the Asian Festival of First Films. She has also won nominations for Filmfare and Screen awards. She resides in Mumbai with her husband and son.