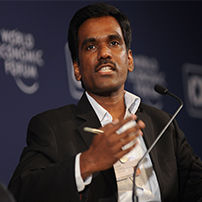 Venkat Matoory is a Public Policy and Business Advisor, with 22 years of business and consulting experience across India, Europe, Asia and United States. Well respected in the professional community for his insight and counsel, he has been honored as an Outstanding CEO (2009) and an Iconic Leader (2017).
After consulting with KPMG, IBM, Infosys and Accenture, he now consults independently and with CBA – an international alliance of business advisers.
He is the India and South Asia Ambassador for Horasis Global. Horasis is a visions community. Together with its members, Horasis explores, defines, and implements trajectories of sustainable growth. Horasis provides strategic foresight to public and private entities who envisage growing into global and sustainable organizations. Among the participants are the Chief Executive Officers of the world’s most respected corporations as well as key business leaders from emerging markets. Also participating are renowned thought leaders and relevant public figures including heads of government and ministers.
In his decade long public policy engagements, he actively influenced stakeholder thoughts across platforms including the World Economic Forum (2009-2016) and as a TEDx speaker. He contributed to Davos 2016 discussions on Global Governance as a moderator and panelist. As a member of Horasis Convention, he speaks at the Global and South Asia Conventions. In his entrepreneurial roles, he has varying exposures to multiple ventures in independent capacity, as family member, and as member of formal investment platforms. An acclaimed educator and thinker, he has authored commercially live pedagogy frameworks.
He is an avid photographer and has been part of the Prime Minister’s Ek Bharath Shreshtha Bharath initiative that published the Ministry of Tourism Photobook on the newly created state of Telangana.
.