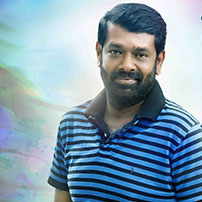 Vasanth is an Indian film director and screenwriter, working in the Tamil film industry. Following a stint as journalist and after assisting K. Balachander, he made his directorial debut with Keladi Kanmani in 1990, which along with the trendsetting Aasai (1995), are considered his finest and most successful films. Known for being realistic, his films have been described as a “middle path” between parallel and commercial cinema, revolving around social themes and relationships.

Vasanth began his career as a journalist and short story writer, before he began working as an assistant director to K. Balachander on 18 films including Sindhu Bhairavi and Punnagai Mannan. He made his first independent film in 1990, the critically acclaimed film Keladi Kanmani, which starred noted playback singer S. P. Balasubrahmanyam and enjoyed a 285-days-run at theatres. He next directed Nee Pathi Naan Pathi, titled after a song from his previous film, which focussed on an unwed mother’s issue. The film features the song “Nivedha”, becoming noted for its visualisation and its lyrics consisting of a single word. His third directorial was the thriller Aasai (1995), which became a trendsetter and high financial success that ran for more than 200 days. Produced by Mani Ratnam, the film marked the first major commercial success and breakthrough for Ajith Kumar, who went on to become a leading actor of Tamil cinema, as well as the feature film debut of lead actress Suvalakshmi, while Vasanth received the Tamil Nadu State Film Award for Best Director.

In 1997, Vasanth’s next project, Nerrukku Ner released. Also produced by Maniratnam, the film introduced actor Sivakumar’s eldest son Suriya, who played a leading role and Bollywood actress Simran alongside Vijay and Kousalya.The film was also a commercial success and ran for 175 days. Vasanth’s subsequent project Poovellam Kettuppar (1999), also starred Suriya, pairing for the first time with Jyothika, who would later become his wife. The film is especially known as being composer Yuvan Shankar Raja’s first major musical success. The following year, two of his films released, Appu and Rhythm. The former was appreciated for Prakash Raj’s performance as a eunuch, while the latter is considered a classic, mainly for its theme and realism, by critics and public. Rhythm told the tale of two individuals who lose their life partners in the same accident and overcome their sorrow to start a new relationship. The film’s soundtrack, scored by A. R. Rahman consists of five songs, each depicting one of the five elements of nature. Vasanth had picked Rhythm as the film “closest to his heart”. Ay! Nee Romba Azhaga Irukke (2002) was his following project, with its major attraction being the first ensemble soundtrack in Indian cinema, featuring five songs, composed by five debutant music directors. In 2007, he made the thriller film Satham Podathey(2007), which was critically acclaimedand a blockbuster at the box office, while fetching him a Tamil Nadu State Film Award for Best Storywriter. In 2013 he made the romantic musical Moondru Per Moondru Kadhal, a film involving three love stories. In 2015, he began his next feature film titled Sivaranjaniyum Innum Sila Pengalum, reported to be a “pro-women film”, in which he would introduce Carnatic singer Sudha Ragunathan as a music director.
During his sabbaticals from filmmaking, Vasanth has worked on several ad films, short films and documentaries as well. The short films, Thakkayin Methu Naanku Kangal, for which he won the National Film Award for Best Short Fiction Film at the 2005 ceremony, and the critically acclaimed Visaranai Commission, based on Sakithya Academy prize-winning novel by Sa. Kandhasami, are the other notable works in his career. He has directed more than 40 advertising films for multinational brands and co-directed the Vijay TV extravaganza Netru, Indru, Naalai along with Mani Ratnam. Besides, Vasanth has been conducting workshops, teaching the nuances of filmmaking. His short film Sanath won the National award for the best film on social awareness, in the 64th National Film Awards, 2016. Sanath is an inspiring story of a victim of medical negligence, resulting in him becoming invalid for life, but who struggles with one-pointedness to open educational institutions for education-dissemination.
Sanath marked the second National award for Vasanth.