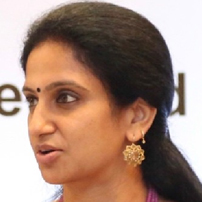 A Frequent speaker at various professional & academic forums, Vanitha is passionate about Women empowerment & contributing positively to women’s issues. Apart from her professional career, she has keen networking skills, which has helped her to be elected in Industry Associations. She served on various panels in CII at the State; Regional & National level over the last Decade and continues to do so. She also served on the Board of the ICFAI Business School Alumni Federation. She actively contributes towards strengthening the Industry-Institute interface for the professional colleges under the Sri Vishnu Educational Society. She was part of the founding team and is the Treasurer of WIN (Women in Network), an NGO that works closely with children & women of urban slums. An Avid fitness person, she has participated in a number of 100kms, 150kms & 200kms bicycle events and has conquered a couple of full marathons, many half-marathons and a 50km ultra walkathon. She has completed many endurance & duathlon events and earned herself the tag of a ‘Duathlete’. Trekking & Adventure Sports are other passions that has led her to visit the Everest Base Camp in Nepal, Mt. Kailash near Manasarovar, Tibet & Mt. Kilimanjaro in Tanzania, Africa, Zip-line in Alaska, Snorkel in the Great Barrier Reef and Skydive in Southern California. She had learnt to play the Veena, Piano & Classical Carnatic vocals at an early age and has also recently dabbled in Vedic Chanting. Additionally, she also enjoys listening to music, reading, spending time with her family & writing articles about her travel exploits, but Traveling remains her true passion & she has traveled around the globe extensively to more than 50 countries.