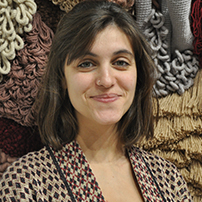 The textile mass industry is one of the most polluting in the world. All the machinery used requires tons of energy while producing a lot of waste and disposable trash. It is extremely harmful for our planet and it affects all of its different natural environments, particularly the ocean which absorbs 90% of the atmosphere pollution. Global warming is erasing one of the most vital environments, the coral reefs. This living and complex natural organisms are the heart of an immense habitat of marine species which depend on one another to survive. Without this pilar, a major part of sealife can become close to extinction which will ultimately affect us and many other living species.
Vanessa Barragão focuses on this problematic and how it is deeply affecting coral reef’s environments. She believes in an upcycling effort and conscious production methods on an attempt to fight this negative mindset and improve our Earth’s health. All the materials used come from the deadstock and left overs of local factories, which is first cleaned and then selected to recycle and reused in her projects. Her production tries to be the most ecofriendly as possible, using ancestral and handmade techniques, like latch hook, hand-tuft, embroidery, felt and crochet, to create her artworks.