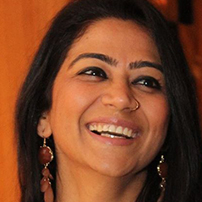 Vandana has over 15 years of work experience of business development, sales, marketing and content strategy in the advertising and media industry. In her last professional stint, Vandana was the national head for the luxury business for Times of India. With the group, she has also worked with projects like Femina Miss India, 50 Most Desirable Faces, TOI Fresh Face etc. It was on a busy summer afternoon in 2014 that Vandana decided to do more with the creative bug that she feels she was born with, a bug that was honed while she was with the companies that she worked with.

And after much thought and a little push from friends and family, Brainstorm Entertainment was floated in June 2014. Having taken a small break from full time work when her kids were from and then rejoining the corporate world gave Vandana the idea for her project, or her third kid, as she fondly calls it. The International Kids Festival is a concept that urges kids to being technology dependent to connecting with the real world, by the way of experiential workshops conducted by professionals over 4 days. The concept is in its 3rd now and in addition to the multi-city executions in India, the first international edition of IKF happened in San Jose, California in 2016; and will soon be launched in other countries across the world.

Championing the cause of career women across the world, Brainstorm Entertainment launched the Women Achievers’ Awards in New Jersey in 2017. The property celebrates these powerhouse of women and the proceeds from this event were donated to the Mijwan Society, an NGO run by celebrated actor and philanthropist Ms. Shabana Azmi. The event is a classic of glamour with a cause as Brainstorm Entertainment felicitates the awardees and ace designer Manish Malhotra showcases his Mijwan collection to the audience. The company has also launched a new IP, the Indian Academy Awards, with superstars Shah Rukh Khan and Madhuri Dixit, which will be held in an overseas location in 2018.

In her ‘time off from work’, Vandana loves to spend time baking with her kids (who are almost amateur chefs), explores her keen interest in spirituality and every other waking minute is spent reading the 1000 plus books that she owns.