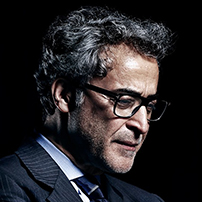 The Transformation Maker – The Brand Futurist

A young boy, passionate about cars, and whose sketches at an early age captured the attention and admiration of General Motors USA, and Opel of Germany, Vahid Mehrinfar in pursuit of his dream moved to America. After finishing High School he went on to study at the prestigious Art Center College of Design, Pasadena. There, Vahid was trained as an industrial designer specializing in transportation and product design. Soon, an entrepreneurial spirit and growing ambitions led him to legendary designer and Hollywood futurist Syd Mead (known for classics such as Blade Runner, Tron, Star trek, and many other Science-Fiction films), propelling him into a truly new dimension of creativity. Inspired by Mead’s renditions, Vahid took upon himself a new challenge – to visualize a different reality, embracing the art of near photorealistic visualization of architectural designs in a completely new cognitive framework. As a self taught
magical realism painter, where his virtual predictions have equaled near photographic eventuality, in his early twenties he rapidly earned the status of being one of the most respected Architectural Visualists in the United States serving a broad base of clientele globally. His propensity for envisioning the future into a virtual realism through his designs and magical renditions
at a young age soon saw Vahid visualizing the future for some of America’s Fortune 500 companies and some notable public personalities. Citicorp, Gerald D. Hines Interests, Prudential Development, Exxon, the Jacksons (the group), Donald Trump’s shuttle airline (Trump Air) and many more, were amongst the enviable list of clients whom Vahid worked with. In 1990 for love he left America to Bahrain where he had to reinvent his career for the Middle East market, and having accomplished this challenging task, Vahid Mehrinfar through Inspiracia Holdings, along with his other business interests in the field of communications, has served his regional and international clientele in the capacity of a strategic brand building and communications consultant, known as the Brand
Futurist. Today, a growing number of clients and industry peers see Vahid as the man who can transform businesses – a craft mastered through his more than two decades of regional experience. A unique approach along with a highly customized methodology that has built many successful communications platforms for the benefit and empowerment of indigenous enterprises, he continues to help build brands in the region. Famous brands such as Bateel, King Faisal Foundation, Maya Chocolates, Optima Home Appliances, Venture Capital Bank, Capivest, The Family Office, Qatar Steel, Solb steel, Dubai Sports City, Nova Water, Aramco, Al Marai, CitiStars Cairo, Bahrain Ministry of Transportation, Bahrain Post and Credimax credit cards, BIPEX are a few clients and success stories among a long list of credentials. Inspirational Fountainhead, Future Gazer, Strategy Master Planner – “The Transformation Maker” Recognized as a creative fountainhead throughout his career, Vahid holds a long list of awards, professional recognitions and honorary industry Positions bestowed upon him. Amongst many achievements, a few highlights beg to be pointed out. In 1984 Vahid was voted one of Houston’s 84 most interesting personalities, in second spot, by Houston City magazine. In 1988 his futuristic rendition of Manhattan, New York, won an award and was featured amongst the top
200 best illustrations for advertising conceptualization by the Communication Arts magazine. Conferred the prestigious ‘Brand Leadership Award’ in 2007 by a global jury at the Asia Brand Summit
in India, he went on to receive the ‘Global Super Achievers Award’ from the Indira Group of Institutes in Pune, in recognition of his immense contribution to the Communications Industry in the Middle East. For half of a decade, Vahid served as an honorary board member of The CG(Computer Graphic)Society, the most respected and accessible global organization for the creative digital artists community. In 2008, Vahid was appointed as a board member of The Global Advisory Council of the Asia Brand Summit. During the same period he served on the advisory panel of VIP Transport, an aviation publication based in Washington DC and Los Angeles. During the past decades Vahid has often been tasked to serve in the capacity of exclusive advisor to various private organizations and their Board of Directors, from banks to green energy companies, Government bodies and philanthropic institutions. His intense seminars on Brand Futurity – a concept which he has developed and a term he has coined, have inspired and captured the attention of many corporations, academic institutions and clientele, be it from Ivy League business schools to high ranking political figures, to senior management, key executives and decision makers. In 2009 his brand consultancy firm, Vahid Associates Brand Futurists, was the recipient of the prestigious New York Festival Midas Award for the best design globally, in the financial documents design category. Being invited to be a jury on graduating projects of various design schools and educational institutions
on many occasions, he has advised many faculty members and students on their post school careers. As a former member of EO (Entrepreneur’s Organization) Bahrain Chapter, he served as a Board Member
in the position of Learning Chair, where he was responsible for organizing various high level learning programs. Respected for his visionary outlook on the subject of future, today Vahid is intensely involved with a number of innovation platforms and startup ventures, as an investor and mentor. He currently serves as an advisor to a number of Technology and FinTech projects.
Vahid has frequently been featured in, and contributed to many industry and lifestyle magazines