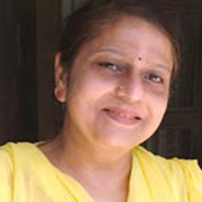 The story of Usha Jha is a story of many women of India yet so very different. The owner of Petals Crafts which she established in 1991, she had to overcome a lot of adversaries to march towards her dream of becoming a self-reliant and empowered women in a patriarchal society. Born on 28th November 1957, in a small village called Bhadreshwar in the erstwhile Purnia district of Bihar. Her father, under the influence of socialist leaders of independent India tried to impart education to all his eight children including his four daughters. Women’s education was not at all a reality during those times. However, her father could not fight the society regarding the child marriage and she was married off at the age of 14. A bright students from the beginning, she did not accept her marriage as the end of academic life, and obtained a Master’s degree in Political Science from Mithila University along with managing her family with two of her children. However, she was not just satisfied with her educational achievements but wanted to achieve a greater heights in her professional life. But as Indra Nooyi said “Women cannot have it all,” she had to wait till her children became old enough to manage themselves. In 1991 she established Petals Crafts and then there was no looking back.
Petal Crafts has travelled a long mile since its inception and have its international presence now. It is registered under Micro, Small and Medium Enterprises (MSMEs) program of the Government of Inia (GOI). As a member of MSMEs, Usha Jha presented the Petals Crafts in two international stages such as “India Show” St. Petersburg, Russia in 2009; and “World Indian Festival” in Singapore in 2014. Though directly into the export, the products of Petals Crafts are in demand in many nations through NRIs and her stint aboard. Petals craft has a client base in all over India and other countries like the United States and Dubai. Within India, some of the largest buyers of her products are Indian Railways, Banks such as State Bank of India and Government of Bihar. The famous Mithila paintings of Petals crafts find its space in trains like Gareeb Rath and Sampoorna Kranti etc.
Petals craft is a business venture with a difference. Usha Jha always dreamt of two things: First, popularising Bihar’s arts and crafts to the whole world and; Second, to bring lasting positive change in the lives of women in Bihar. She is realising this dream through Petals Crafts. She primarily works with women artisans from various parts of Bihar and showcases their work to the world. In doing so, she takes extra care of fulfilling the needs of the artisans. She has facilitated many rural artisans in formalising their income through bank accounts and started the online transfer of money for them. Being an informed citizen, Usha Jha has always adopted eco-friendly initiatives in the business. Completely understanding the menace of plastic, she has never used them in her business and this has acted as an inspiration to other business persons in Patna.
After taking Petals Crafts to a certain height she thought of working with more women to empower them economically. According to Usha Jha, economic empowerment of women is the first step in realising the dream of women empowerment in a patriarchal society like Bihar. In order to increase her reach to more women, she established Mithila Vikas Kendra (MVK) in 2008 as corporate social responsibility of her business venture. Under MVK she has focused on the three most important aspects of women’s economic empowerment: 1) skill developments, 3) resource mobilisation for micro enterprises; and 3) finding markets for their products. The MVK mostly works through women self help groups. Apart from these initiatives MVK also works for the education of the women in the self help groups and their children.
With a firm believe in what she is doing, Usha Jha plans to reach out to more and more women of Bihar to transform their lives into a fulfilling and empowered ones. She personifies her name which means the “first phase of dawn”