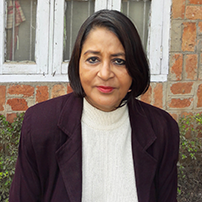 Urmee Majumdar is working as Rehabilitation Personnel for Persons with Disabilities in the rural areas in the Northeast in a Community Based Rehabilitation program with the voluntary Organization SWABALAMBI since 1997 also pioneer in initiation and promotion of Community Based Rehabilitation (CBR) for Persons with Disabilities in the rural areas for Inclusive development in the areas of Health, Education, Livelihood, Social and Empowerment at all levels from 1097-2017.She also worked as a Special Educator at Shishu Sarothi Guwahati from 1988-94. From 1980 to 1985 she worked as a Commercial Executive in Usha International, Guwahati.
Achievement
▶ International Award From World Women Summit Foundation ,Geneva, Switzerland in the category Creativity in Rural Lifestyle in 2013
▶ Women Achievers Award from FICCI Ladies, Assam Chapter in 2012
▶ Women Achievers Award from Loreto Alumnae Association Guwahati in 2012
▶ Stree Shakti Award from Lion’s Club International in 2012
▶ Dimoria Block Government Award for facilitating Employment of Persons with Disabilities in Dimoria Block, Kamrup District in 2014.
▶ Women Achievers award from Karunadhara in 2014
▶ Women Achievers Award from Indian Institute of Entrepreneurs in 2015.
▶ Felicitation from SNDT Women;s University, Mumbai, World Vision of India, Assam Association of Physio-therapy, and Bordoichila cultural Club, Guwahati
▶ Recognition from DM-India, World Bank for scaling up og Community Based Programs for Persons with Disabilities in the rural areas of Assam .
▶ Nari Shakti Award 2018 from Lion’s Club International , Nagaon District.