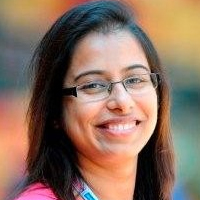 Worked as a Journalist for 14 years with leading newspapers and TV Channels. Expertise in understanding sportsperson psyche ensured working to unearth never told stories about women and girls who have been using Sports to empower themselves and the society at large. A Chevening Scholar, she has been working for the last 8 years as a Sports Communication Specialist and have documented and highlighted stories of women athletes breaking barriers and making India proud in various field of sports.

With innumerable Cricket World Cups, Commonwealth Games and Olympic reporting under her belt she had an exceptional media career. However, driven with passion and the quest to do something on her own, she quit her job in 2012 to start India’s first dedicated Sports Communication Agency, Artsmith Concepts & Visions. Since then Artsmith, one of India’s leading Sports PR and Social Media Agency has been instrumental in working and ideating closely with various Sporting Leagues alongside the Sports Federations, Administrators and also handholding Sportspersons so that their story can be brought forth to the world and media.