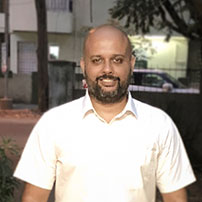 Uday Dhanda is a management and marketing consultant from Chennai. He first started training in Krav Maga, an Israeli self-defense and fighting system, nine years ago. In 2013, he was certified as an instructor and started conducting workshops for women on self-defense. His first student was his sister. He had noticed that not only were unqualified people conducting training or classes, but women were signing up for skills like martial arts, unaware that it would take years to master the techniques. Uday felt the need to impart basic, quick and practical training to women which they can easily remember during a crisis.
In his stint as a trainer, he’s worked with Tamil Nadu Commando Force and CISF under the constant support and guidance of Mr Sreeram from Krav Maga Tamil Nadu.
By learning, training and teaching Krav Maga, Uday Dhanda has realized three things about self-defense

1) alone, you have only yourself to rely on
2) self-awareness is everything
3) there’s no honour or respect when protecting oneself or a loved one