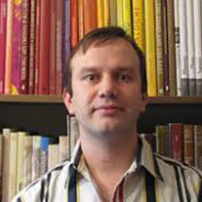 Dr. Tudor Dinu (b. 1978) is a lecturer at the University of Bucharest, where he teaches Greek language, literature and civilization. He has given lectures and lectures as a visiting professor at the universities of Berlin, Kiev, Brno and Nicosia, but also at several scientific societies in Greece. In recent years he has participated in the most important international congresses of neo-Hellenic studies (Tbilisi, 2007; Nicosia, 2008; Athens, 2008; Mesolonghi, 2008; Sofia, 2008; Riga, 2009; Patra, 2009; Kiev, 2009; Kalymnos, 2010; Granada, 2010). Since 2010 he is one of the five elected members of the steering committee of the European Society of Neo-Hellenic Studies.
His works on ancient Greek, Byzantine and post-Byzantine philology and history, but also on Hellenism in the Romanian countries, were printed in Romania, Greece, Cyprus, Czech Republic, Latvia, Ukraine and Georgia. At the same time, Tudor Dinu has published translations from both ancient authors (Aristophanes, Plutarch, Iamblichos, Seneca, Plinius Maior) and modern ones (Iannis Ritsos, Nikos Engonopoulos). He is the founder and editor-in-chief of the first Romanian journal of Neo-Hellenic studies, Neograeca Bucurestiensia.