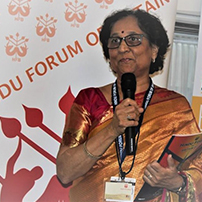 Mrs Trupti Patel becomes the first Hindu woman in the UK to be appointed President of the largest national Hindu Umbrella organisation – The Hindu Forum of Britain (HFB). With over 40 years of experience in the field of Highways, Traffic and Transportation, Trupti has successfully managed various divisions at Salford City Council , Manchester City Council and Three Rivers District Council. She was appointed as ‘The ‘Traffic Manger “ for the Salford City Council between June 2007 and April 2009 and now she has own consultancy dealing with projects
involving network management , sustainable transport , environmental improvements , road safety, climate change issues and helping voluntary organisations in technical matters. She trained as a civil engineer, gaining a BEng in Civil Engineering at Sardar Patel University in India. It was a path that she continued to follow came to Britain, along with working full time, she achieved post graduation in Highways and Transportation from the City University and became fellow of the Charter Institution of Highways and Transportation UK. In 2004 , she became the first woman civil engineer of Asian origin in the UK to hold highest office in a Local Government as assistant Director at SSC, so she joined as one of a very small group of women who have triumphed over adversity and has become successful in an arena that is firmly male dominated and has thereby also become a prime role model for all women throughout the country. Her involvement with community engagement spanned over 40 years and was so sad to retire form the trusteeship of the Community Arts Northwest and Voluntary Community Faith Partnership in 2016 when she moved back to London from the North West. Trupti utilises her vast skill set purposefully in supporting a range of voluntary organizations including: First Asian and women to invited to co-author: Chapter 1 : Highways
Legislation : England and Wales : ICE manual of highway design and management,May2010 https://www.icevirtuallibrary.com/doi/abs/10.1680/mohd.41110.0003 Interfaith Network UK and Faith Forum UK – first women to be elected as
Hindu Unity representative in May 2019 Director 2014 -2016
Home office panel ‘Security of faith buildings’ from 2015 .
Regular participation on BBC & various TV channels Radio
Charter Institution of Highways and Transportation :2001 onwards. Following
on from her position as the first woman civil engineer of Asian origin in the
UK, she became the first woman chairperson of the NW Branch (2007/08) .