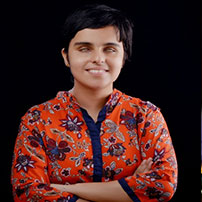 Tiffany Brar, a born fighter, did not let her disability stand as a hindrance in her moving forward. She became blind due to the sheer negligence of a doctor, soon after birth. Though her parents tried to rectify her condition, it was to no avail and she strongly believes that it is for a purpose that she is visually challenged and her disability is a way to bring possibility for others like her.
She studied for her prime years in Great Britain, after which she returned to India and pursued her schooling. It was the discrimination and segregation she met on account of her disability, that instilled in her a drive and a determination to change the plight of her fellow blind brothers and sisters. She being forcefully made to sit at the back of the class and not being allowed to participate in sports, only made her more determined to make a change.
She is a motivational speaker, a special educator, a social activist, ever ready to raise her voice for her community and for other disabilities as well.
She has travelled far and wide and due to this has a good command over six Indian languages. Despite all hurdles and challenges on account of her disabilities during her education, she was able to score the highest marks in the CBSE board examinations, in comparison to her sighted counterparts.
She completed her Degree in English Literature from Kerala University and then her Bachelor’s in Education in special education from Rama Krishna Mission Vivekananda University, Coimbatore after which she began her career as a receptionist. She then went on to visit many blind people and found out that they were all back benchers and even tied to their beds. She immediately wanted to put her skill to action and started a mobile blind school, which follows the motto that “if blind can’t go to school, let the school go to them”. She went to many homes far and wide throughout the state of Kerala in public transport training the blind that were confined within their four walls in mobility, confidence, communication, daily living skills, Braille, access technology and so on.
29 Year old, Vinod who had been stuck within his home for his entire life, without even a glimpse of the threshold of a classroom, came under her wings and after which he acquired wings of his own. He became an access technology expert; he became mobile and travelled independently. He is now a trainer in access technology and a sound editor and has become a bread-winner of his family. Hanna once shy and timid, now after being trained by Tiffany at Jyothirgamaya, is now able to use a computer, composes her own songs, gives motivational talks to others and is good in her studies and will soon be writing her exams on a computer. Tiffany as a lover of independent travelling and adventure has broken the barriers that girls can’t do sports, especially those who are blind by proving the society wrong. She has done sky diving, paragliding, tandem cycling, rope climbing and a lot more. She has encouraged her students to do tandem cycling and rope riding to and always takes them on adventure trips. Her organization has played an integral role in empowering the blind and blind women empowerment. The President himself addresses her as “THE COURAGEOUS DAUGHTER OF INDIA”, at his address to the country at the United Nations International Day for Persons with Disabilities in December, 2017 where he also presented her with the “National Award for the Best Role Model”. Her efforts have also received felicitation, from the renowned Late DR.APJ.Abdulkalam. Shri Mohanlal, one of Kerala’s most renowned actors, calls her “A MIRACULOUS WOMAN”, in his talk show Lalsalam. She has also been appreciated by the famous Bollywood director Omung Kumar, actor Vivek Oberoi and actress Huma Khureshi, on the occasion of the enactment of her story on Zee TV show, INDIA’S BEST DRAMEBAAZ, where she also received the “Real Hero Award”.
She is one of the only blind women In India who has delivered five Ted talks on a variety of thought provoking subjects and she is going to deliver her sixth soon!
She has delivered an insightful talk at the European parliament in Brussels, and has participated in their panel discussion on accessibility. She is the only blind woman in India, to reach such heights. She has been trained by the “Mobility International USA” in leadership and women’s empowerment.
She has also been trained in echolocation, a unique aspect of mobility and navigation by “World Access for the Blind”.
She has conducted many sensitization sessions in India as well as in Nepal, Poland, Germany and Belgium. She believes that there is nothing a blind person can’t do except driving a car and that soon shall be achieved at some point! As an activist, she has raised her voice for her community, in trying to make the currency notes accessible for the blind. She sensitizes companies to make web content accessible according to the web content accessibility guidelines. She has also participated in the “National Consultation for Inclusive Elections” and always advocates inclusion. She favours inclusive travel and tourism and has given her valuable inputs to the tourism department to make tourism accessible and barrier free.
She has many awards and accolades to her credit.