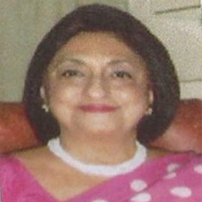 Threety Irani was born in Colombo, Sri Lanka and lived there till her marriage in 1956 when she came to Kolkata and has lived here since then. She has three daughters, six grandchildren and seven great-grandchildren. Her husband C.R. Irani was editor of the Statesman till his death in 2005.

She is a Member of the International Guild of Beauty Therapists and the Independent Professional Therapists and a Post Graduate in Skin Therapy from the Arnold-Taylor Organization, London. She has served on the Union Public Service Commission in choosing teachers in Beauty Therapy for government sponsored courses. She has also served on Committees of the West Bengal Government and helped them to set up their first Beauty Training School in their Polytechnic in Ballygunge, Kolkata. She has her own training school which she started in 1977 and has been responsible in helping her students to set up their own saloon in the 1980’s and 1990’s all over North East India, Bihar and Orissa.

She and her dauthter Nilufer, who works with her, travelled to Bihar where they give training to village girls. Nilufer also trains the wives of Jawans at the Army Welfare Association and under priviledged girls at Kamas Kutis.

‘Womans World’, her beauty saloon which she opened in 1977 was the first of its kind in Eastern India. She remembers that in the first two days more than a hundred ladies walked in to see what this skin care clinic was all about. When she started her twin daughters, Nulufer and Nisvan were therapists (they are both highly qualified), Ratti the eldest was the Receptionist and she had a hairdresser and her sister was also doing hair-dressing, manicures and pedicures.

Today, forty years later, ‘Womans World’ has a large and loyal clientele, and there are families coming for three and four generations.

Threety, still at the age of 84, goes to the Saloon three times a week and meets her clients, checks their skins and advises them on skin and hair care.

She and Nilufer do a weekly “question and answers’ column in the Evolue Section of the Statesman.