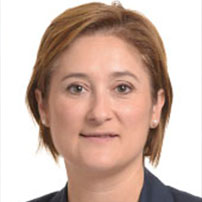 Member of the European Parliament, Brussels from Malta

Therese Cachia is Comodini advocate for human rights. It has been up since 1997 to defend people who have suffered from injustice, both in court and in Malta before the European Court of Human Rights. Comodini Cachia helped a number of non-governmental organizations through legal advice. This work continued up to the various needs of different groups in society. She strongly believes in respect for the dignity of each individual. Comodini Cachia is also a lecturer at the Faculty of Law at the University of Malta and coordinate the Masters in Human Rights and Democratization. She gave lectures at the University of Utrecht the Netherlands and the Europa-University Viadrina in Germany.

In May 2014, Comodini Therese Cachia was elected as a member of the European Parliament. She served as a member in the committee for culture, education, political youth, media and sport (CULT), the Committee on Legal Affairs (JURI) subcommittee for human rights man (DROI) and the committee of inquiry on the money laundering and tax evasion (PANA). It also served as a member of the delegation for relations with the Palestinian Legislative Council, the Union for the Mediterranean Parliamentary Assembly and the delegation for relations with China.

Comodini Cachia worked among others on the files related to the Digital Single Market such geoblocking , creative and cultural industries, the 5G and implementation of Infosoc. It is the rapporteur on the directive copyright in the Legal Affairs Committee. In March 2016, Comodini Cachia was the prize of the MEP of the Year by The Parliament Magazine, in the area of corporate governance. In March 2017, Comodini Cachia was ranked as the 27th most influential MEP for 2017 by Politico magazine.

Comodini Cachia has been active and participate in the Nationalist Party and was a member of the Commission for review of the statute and the party structures. It is considered a benchmark for the Parliamentary Group having contributed positions on amendments to the Constitution of Malta. At present is coordinating the PN Policy Forums. January 2015 was the role of minister shadow education and employment and in May 2017, Comodini Cachia accepted the invitation of Chief Simon Busuttil to contest the general elections of 3 June on 4th and 8th electoral districts and was elected on 8 electoral district.

Therese Cachia Comodini graduating in law in 1997 and has a Ph.D. in the human rights field. She is married to Vladimiro and have a daughter, Laura.