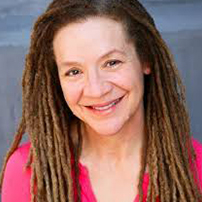 Terri Hardin (b. 1957, Pasadena, California) is a puppeteer, artist, and Legendary Disney imagineer.
Her first Hollywood job came during her college years in which she built the stillsuits for the film version of Dune and acted as a stunt double for Sean Young. A job on the Columbia Pictures blockbuster Ghostbusters followed in which she played both of the demon dogs at the “Temple of Zuul” and served as a puppeteer for both the Stay-Puft Marshmallow Man and the ghost librarian seen at the opening of the film.
Hardin was hired by Disney Studios in 1987 during her stint with Universal Studios Hollywood as a sculptor creating “walk-around” character costumes. As a Disney Imagineer she helped design the Big Thunder Mountain Railroad and is solely responsible for the design of La Tanière du Dragon (The Dragon’s Lair) attractions at Disneyland Paris.
Hardin later worked for Disney’s sculpting team, where she contributed to the Splash Mountain attractions and to Jim Henson’s Muppet*Vision 3D. She has also created sculptures Disney collectables and for Mattel, Nickelodeon and Applause.[1]
Hardin worked for The Jim Henson Company for over 30 years, performing in Dinosaurs, The Flintstones, The Indian in the Cupboard and The Country Bears.[1]