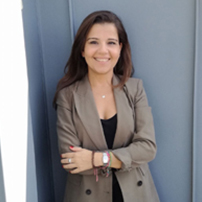 Teresa Morais is jurist, translator and activist. She was born in Lisbon, where she attained her law degree, graduating from the Nova Law School. She then moved to São Paulo, Brazil, to work at Machado de Campos, Pizzo Barreto Advogados Law firm. She lived in Brazil for four years, where she discovered the overwhelming feeling of being a person of the world. During a brief period in Lisbon, she earned a post-graduation in Legal Translation, awarded by Universidade Autónoma. She then moved to London for another four years. She still considers herself a Londoner, strongly believing that “when a man (or woman) is tired of London, he is tired of life”. She now lives in Lisbon, next to the people she has missed the most throughout her migrant adventure. Her activist path officially began while volunteering for the Chicas Poderosas Portugal NGO. She writes about feminism and other causes for the Capital Magazine online platform and is committed to add her voice and presence to the fight against gender, racial and economic inequality.