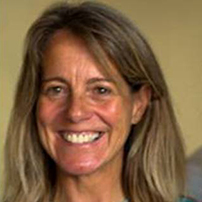 Teresa Abraços has been passionate about surf for 35 years. She is an ex-national Champion and was one of the female surf pioneers in Portugal. She was part of Portugal’s National Team in countless European and World Championships.
She went on to combine competitions with her studies and work, having taken a degree in Modern Language and Literature (English and German Studies), at Lisbon Classical University. She then worked for the TAP airline until 2017.
For Teresa, surfing and winning championships was not enough. She always found ways to use surf in order to actively integrate the community. This is what she aims to show, not only through her trips to Africa but also through adapted surfing.
She loves travelling and the trips she organizes annually to several destinations where she joins surf with solidarity are widely known. During these trips she always visits a primary school in a poorer area and takes school materials from Portugal. Cape Verde, Ivory Coast, São Tomé and Príncipe, Senegal, Ghana, Mozambique, amongst others, are a few of the countries where she has spread many smiles.
She is currently a volunteer and also the vice-president of the Portuguese Adapted Surf Association (SURFaddict). This non-profit association was created in 2012 and it brings physically or mentally handicapped people to the beaches, giving them the experience of gliding through the waves, in an inclusive spirit where all interact, also bringing about the issue of accessibility.