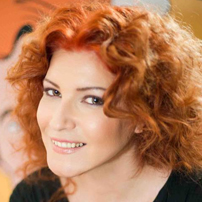 With a passion for forward thinking ideas, Tedi Migdalovici is an international public speaker. For almost two decades she has spoken on emotional intelligence, has trained creative people on their way to win Cannes Lions trophies and has shared her view of the industry’s future on global stages, from London to KL, from Paris to Singapore, from Vienna to Tel Aviv, working with British American Tobacco, Coca-Cola, Google, Geometry, DDB Malaysia, Nestle, Mauritius Commercial Bank, McCann Adriatics & Tel Aviv, P&G Europe, UM or Vodafone.
A pioneer, she is also a brand therapist, an awarded author, a personal branding strategist at MEALCHEMY.COM and the founder of The Alternative School for Creative Thinking, one of the most successful Creative MBAs in Eastern Europe, with Gold Lions in the portfolio. As a cultural lobbyist, she promoted Romanian creativity in international contexts. After finishing her diplomatic studies, she launched LoveAndLobby.com, the private diplomacy platform to promote talents from less known countries or regions of the world with a stigma attached to their name.