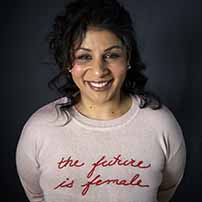 Tasleem Somji is a creative consultant and cultural strategist. With a myriad of global and local experiences to account for, she has embarked on a variety of mediums from film curation and cultural
institution development, to live sports and entertainment events,marketing and content production, IT and communications management, and most recently in international development.

Tasleem spent over a decade working with the Toronto International Film Festival (TIFF) as a member of the senior operations team, leading its transition from an annual festival to a year-round film institution. Her work in the industry has been instrumental in shaping and aligning local and national festivals, and in 2004, Tasleem was selected to join an international team in establishing the Dubai International Film Festival. During it’s
fourteen-year tenure, the success of the festival led to a new platform for Arabic cinema, launched the UAE as an emerging cultural hotspot, and helped to initiate several film festivals, film programs, and film institutions across the Gulf region.