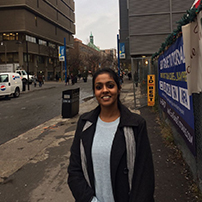 Tarusha is an award winning entrepreneur. She has been working in the field of technology since 2009. She has co-founded multiple tech ventures – some of whom have evolved and some have become self sustaining machines, over the years – including Cloudrino which is a cloud management and infra platform. She was in the founding team of ethx.co , as well. Ethx has now been rebranded as OroPocket- a universal investment platform on blockchain. She takes care of Operations and Design.
She has been a part of several accelerator programs all over the world and has won STEP 360 award for Technology, as well as , a DST grant award from the Government of India and IIT-Delhi. She was one of the finalists for the Anita Borg’s WEQ’s cohort for the year, 2019. She has been working in the blockchain and crypto space for 5 years. She has been a part of two anthologies and is also a podcast host. She is running a pet project called MsCEO – which empowers and mentors aspiring and early stage women entrepreneurs.