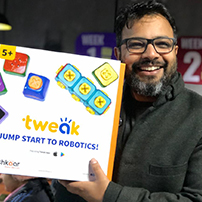 Tarun is a quintessential maker who strongly believes “Making is better than consuming”. It’s this belief that led him to start Avishkaar in India when no-one had heard the term of “Making” in the country. He has single-handedly created a market for Robotics, Tinkering and Making Products in India. However, what keeps him most excited is his status as an engaged Father of two beautiful girls, a thoughtful Maker, a Vipassana Meditator and an avid traveller. Before Avishkaar, Tarun worked at Real Networks, Expedia in Seattle, US and Wipro Technologies, Aplion Networks in India. Tarun has a BS in Computer Science from University of Delhi and Masters from University of Washington, Seattle