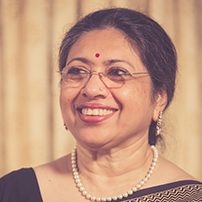 Internationally reputed dancer Tanusree Shankar is the choreographer and the chief inspiration of the troupe bearing her name. Tanusree has developed a kind of choreography, which reaches out to audiences worldwide. Her choreography is not a combination of classical dances, but is outstanding and original, giving concrete shape to the music that inspires it and is based on the Shankar technique of “New Dance”, following the path shown by Uday Shankar. As a choreographer, Tanusree has excellent credentials. She was the chief choreographer for the Kolkata Karnival organized by the British High Commission and held for the first time in India in 2002. In 2008, she choreographed an Indo-French Ballet called “Padmavati” directed by renowned Indian film maker, Sanjay Leela Bhansali in Paris with international artistes.
Tanusree is the recipient of the Sangeet Natak Akademi Award for 2011 for her contribution towards Creative and Experimental Dance.
She has worked on various collaborative projects with renowned international artistes. She is curating the dances in the first edition of Serendipity Arts Festival, an initiative of the Munjal Group, from December 16 – 23, 2016 at Goa.