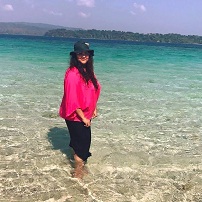 Tanuja Shankar Khan, has been born and brought up in Patna, where she stayed till 1996 with her family.

Masters in English Literature from Patna University and Diploma Holder in Mass Communication, Tanuja was brought up in a very academic and artistic environment, where she along with her three bright siblings was given all opportunities to participate in various forms of performing arts and media like Theater, Music, Drama, Radio, Writing and Television by her erudite parents.

Tanuja, started her professional career by joining her own alma mater, the prestigious Patna Women’s College as a lecturer of Radio & TV Journalism in 1994, teaching students of Communicative English and continued till 1996. Witnessing the satellite television’s boom in metro cities like Bombay and Delhi, She decided to shift to New Delhi and start her career in television. From 1997-2004, she diligently worked for various TV Production Houses and Channels producing and directing different genres of television programming and documentaries for top TV channels in India.

In 2004, her career shifted to media education and she got closely associated with a number of Film & TV Institutes and at present is working as Channel Advisor, at Doordarshan National, New Delhi.

Along with this, Tanuja’s creative buds have always been tickling to create something new and thus she started writing scripts for films, and thus was born the idea for the film, ‘MUSIC MERI JAAN’ based on youths participating in a music reality show. “Flames Of Paradise” is her first novel, after being into writing of short stories and scripts for last 20 years.