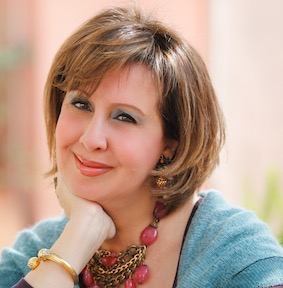 With a Bachelor of Arts in English Literature, she joined Al-Ahram Establishment, served as a writer and reporter in Foreign Policy and Women departments before becoming United Nation’s correspondent for Al-Ahram for consecutive 12 years.

Influenced and absorbed by her passion for art since early childhood, Sylvia aspired to create an intelligent, beautiful and informative magazine to educate, inspire and motivate the Egyptian and Arabic speaking world in art, culture & design.
By the year 2000, Sylvia conceived the concept, founded and executed the successful launch of ElBeit magazine, published by Al-Ahram‎ serving as editor-in-chief for fourteen years to follow.
ElBeit magazine instantly became the most powerful brand in its category – in content, circulation and revenues.
Thus Sylvia became one of the most recognizable art, culture and design names for creating one of the most powerful media brands in the Middle East and making ElBeit magazine the flagship publication of Al-Ahram.
Sylvia’s significant contribution in raising cultural awareness in the region led to the development of a new generation of craftsmen and artisans, designers, landscapers, real estate developers, manufacturers and the retail industry whose work is marveled region-wide and beyond, owing to Sylvia’s persistent endeavors inspiring, supporting and promoting Egyptian arts and heritage.

In her relentless and unwavering pursuit to preserve national art treasures and revive cultural heritage, “Al-Ahram Arts Centre” was created and headed by Sylvia as Secretary General in recognition of Sylvia’s initiative to showcase a selection of Al-Ahram fine art collection, only second to the Egyptian Museum of Modern Art.
It took four years of research and hard work to document, gather and restore 100 art gems, carefully selected and restored, from over 750 objects of art by legendary artists of Egypt, which previously decorated the walls of Al-Ahram hallways and offices.
The project also aimed at sponsoring and supporting young and emerging Egyptian artists.
The public exhibition opened to celebrate the outcome and accomplishments of passionate and meticulous work, hosting Egyptian and International visitors and dignitaries, with a “A Century of Art book” released to document the works.

As writing was always her passion, Sylvia, being a talented and keen writer with an eclectic range of interests, wrote in Al-Ahram and many other dailies and magazines covering a multitude of topics, but all with deep compassion for humanity.