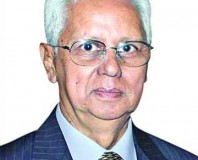 Syed Muazzem Ali was born on 18 July 1944 in Sylhet. He obtained his Master’s Degree in Science from Dhaka University in 1966, and placed in the First class. He had professional trainings at the Civil Service Academy, Lahore (1968-1969), at the School of Advanced International Studies, John Hopkins University in Washington DC (1973-1974), and at the International Peace Academy in New York (1983).

The Bangladesh High Commissioner to India is a former Foreign Secretary of the Government of Bangladesh. Mr. Ali had joined the Pakistan Foreign Service in 1968, and retired from a distinguished career in Diplomatic Service in December 2001.

While serving in the Pakistan Embassy in Washington DC in 1971, he declared his allegiance to the Government of Bangladesh. As a founding member of the Bangladesh Mission in Washington DC, he was active in the lobbying process for political support for Bangladesh’s independence movement and, after its independence, he was directly involved in working towards US recognition of Bangladesh as well as the US, World Bank and UN participation in the massive reconstructions efforts in war-ravaged Bangladesh (1971-1975).

In Paris, he was also Bangladesh’s Permanent Representative to the UNESCO. In that capacity, he tabled a draft resolution, on behalf of Bangladesh, for the proclamation of 21st February (Bengali Language Martyrs’ Day) as the International Mother Language Day. He spearheaded the lobbying efforts and its unanimous adoption by the UNESCO General Conference in 1999.

As Foreign Secretary, Ali worked for the peaceful resolution of conflicts in the South Asian region and beyond. Since Bangladesh was the Chairman of the LDC group at that time, he coordinated the move that led to duty-free and quota-free access of LDC exports to the EU at the Third UN LDC Conference. He also worked for the emergence of Bangladesh as the largest troop contributor to UN Peace keeping operations.

Ali comes from a distinguished literary family of Greater Bengal. His father late Syed Mustafa Ali and uncle Late Syed Murtaza Ali, served in the Assam Civil Service prior to 1947, and also wrote several books and articles. His youngest uncle Late Syed Mujtoba Ali is a distinguished writer of Bengali literature. His eldest brother Late S. M. Ali (Syed Mohammad Ali), founder-editor of the leading Bangladeshi English newspaper “The Daily Star”, was one of the most well-known Bangladeshi journalists in the international arena. His father-in-law Late Chowdhury Imamuzaman served in the Assam Engineering Service prior to 1947. His wife Tuhfa Zaman Ali obtained her M.A. from Dhaka University and M.Phil from Jawaharlal Nehru University, New Delhi. Mr. Ali is the father of two sons, and has three grandchildren.