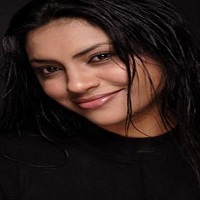 A multiple world record holder and award winner, Swapna Abraham is a singer-songwriter, actor, author, interior designer, mentor, and marketing and branding enthusiast with her roots and formation in India and prime experience in the UAE.
Swapna has authored and produced 21 musical albums and performed extensively on the international gospel music platform (www.swapnaabraham.com). Holding 4 world records in singing and songwriting with the Golden Book of World Records (www.1000songsin1000days.com), she has also published a memoir “She Played In The Dark” entailing the journey and lessons through the 1000-day world record journey.
A mentor in singing and songwriting, Swapna championed the first branded karaoke cafe “Kafeoke” in India with a school for singing and songwriting and a recording studio. She is also known for her acting performances as Donna in the Mamma Mia musical directed by the late Mithran Devanesan, and Meenakshi in the Tamil feature film Nadunissi Naaygal directed by Gautham Vasudev Menon. Her years at the T A Pai Management Institute and Indian Institute of Management Kolkata led her to becoming an avid marketing and branding enthusiast. Leaving no flair unpursued, Swapna is also an interior designer and member of the Designers Society of America (www.alikainteriors.com).
In culmination, Swapna is the recipient of the NeedStar Award (2010), a Women’s Day Citation “Role Model for her progress and success in the field of Mainstream Career, Art & Entrepreneurship”; the Lamp-Icongo Karmaveer Chakra for Gospel Music Maestro Award (2012) for the contribution to gospel music from 1991-2012; and the Aspire World Award (2019) for her Passion for Excellence at the 31st Global Women’s Empowerment Summit, Dubai.