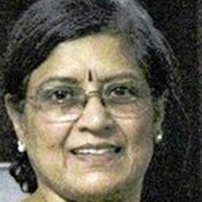 Sutapa Sanyal is an expert in Ending Violence against Women (EVAW), child protection, and anti-human trafficking. For her service, she has been awarded the Police Medal by the Hon. President of India. Currently she serves as Director General of Mahila Samman Prakoshth (MSP), an innovative police unit protecting the rights of over 13 million women and children in Uttar Pradesh. At MSP, she is credited with creating award-winning interventions for fighting VAW & enhancing Gender Equality. These include: Vikalp, India’s first police portal for reporting Violence Against Women (VAW), which increases women’s access to the criminal justice system. Nav Chetna, a training module for Gender-Sensitization of Law Enforcement officers, which was recommended nationally to other states as a “Best Practice”. Akshaya, a Self defence training program for girls. ‘Citizen Cadet,’ a program that channelizes the leadership of women’s collectives to fight VAW. Ru-Ba-Ru, a community policing program for increasing communications between the police and the public. She has also built successful Public-Private Partnerships with UNICEF, Action Aid, Plan India International and other stakeholders in order to expand these interventions. Ms. Sanyal’s efforts are built from the bottom up and include not just women and children, but also involve men in the fight for gender equality. She has leveraged technology, mass media, citizen participation, community policing and in-house training to deliver a complete model for police transformation. From rescuing hundreds from sex trafficking, to protecting thousands of women from domestic violence and helping them get justice, Ms. Sanyal’s work has created breakthroughs in women rights and empowerment in India’s largest state. Her interventions have been recognized by Govt. of India, the Govt. of UK, INTERPOL & US Department of State. She was invited to the UK by the British High Commission as part of an Indian Women Leaders Delegation to share strategies for Ending Violence Against Women (EVAW). She has also represented India at the INTERPOL for the Specialists Group on the Protection of Children. She also serves as a member of the Govt. of India’s Micro Mission 7, which helps evolve policy recommendations for gender equality. Ms. Sanyal has been awarded the Indian Women Excellence Leadership Award by the BRICS International Conclave, the Gurudev Rabindranath Tagore Award by His Excellency Governor of Uttar Pradesh and the FICCI-FLO Award for Outstanding Policewoman. She holds certifications in gender studies from Johns Hopkins University and in management from London Business School, and has been a speaker on public policy, policing and women empowerment at various forums including the India Today State of States Conclave, IIM, and FICCI.