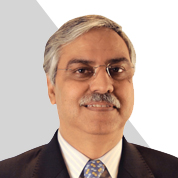 Mr.Munjal is the Jt. Managing Director of Hero MotoCorp Ltd.and Chairman of Hero Corporate Service Ltd. Recognised by ‘India Today’ – India’s largest English newsmagazine, as one of the “Faces of the Millennium” for business
He is responsible for developing growth strategy and implementation of new business plans for the Group.
Mr Sunil Kant Munjal has received Glob Scot Award from the Scottish Government in Sept., 2012. His name has been inscribed on The Royal Society of Medicine’s Wall of Honour at London in recognition of his contribution in Affordable Healthcare as President of Dayanand Medical College & Hospital, Ludhiana in February, 2013.He is also the President of the Ludhiana SanskritikSamagam, an organisation that promotes performing arts across North India.
He is also the Founder Chairman of BML Educorp Services and is the guiding force behind the BML Munjal University and is playing a key role in helping create a unique Higher Education Initiative.
He is an Advisory Board Member of the UK India Business Council.
He is on the boards of the Indian School of Business at Hyderabad and Mohali. He is Member of the Board of Governors of IIT, Ropar in Punjab. He also serves on the President’s Council at the University of Tokyo. He has been appointed by the Punjab Govt as Chairman of the Board of Governors of Punjab Technical University, Jalandhar in October, 2012.
Mr. Munjal was President of Confederation of Indian Industry (CII). He is currently a member of Prime Minister’s Council on Trade & Industry that regularly interacts with the Indian Prime Minister on economic issues.