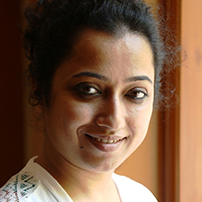 An independent upcoming film maker and Social entrepreneur from Kolkata born in a rural belt of Jharkhand, her passion toward films made her opt for film making, leaving a dazzling career in advertising and started her way in films independently in year 2007 with a Bengali movie ETI and founded “Pixel International” (www.pixelinternationalfilms.com)
She made more than 100 shorts and documentary produced 3 features independently and directed some. Some of her work as producer: Eti, Atin ela & Charadhaya, voyage, Towards life, A missing Smile etc. She has been nominated for NETPAC award and won several accolades along with Golden Camera Award, Global cinema Award. Her debut film has been screened different Film Festival nationally and Internationally.
She is actively involved in cultural and social issues and promotes new talents/local talents, with Culture Curry (a platform to promote local talents). Recently she curetted 1st International Spiritual Film Festival (www.isffi.co.in), at Ujjain during Kumbh- 2016 and was in organizing committee as Festival Director.
She also held position of Chairperson ALL Ladies League Kolkata and West Bengal Chapter for some time. She is now Chairing Film Festival Committee – ALL (All Ladies league) and Women Economic forum (www.www.wef.org.in)
She is also founder members of AIFDO (www.aifdo.in) a NGO working toward capacity building in field of cinema, art and culture and community services by showcasing film for cause and organizing workshops.
An avid traveller and Love to click, she has clicked more than 5000 photographs and organized Lens Paint an unique Photo Art in the capital City New Delhi with Taj Vivanta.