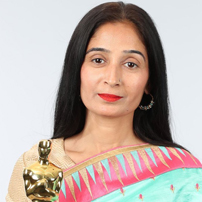 I am a woman who finds great joy in supporting other women to live a life of connection, health and wellness. This has been my life’s passion, joy and work. Over the decades I have found myself working with women of all ages and stages, 100’s of 1,000’s of hours spent being with women. More than ever before, we have the power to shape the future we want to see. We have new abilities to connect to each other and new tools and technologies to drive progress further and faster.
Our journey also forms the subject of the Oscar-winning documentary. ‘Period. End of Sentence.’
Suman is associated with a women’s welfare group “Mahila Sabla Sangh”, that approached Suman to educate women and girls about health and hygiene. Making sanitary napkins was also a part of the project. Taking up the project, Suman just give her home for sanitary napkin making unit. Finally, it was installed in Suman’s house.
Thereafter, it was a Herculean task in a village to talk about such an issue in the conservative village. It was not an easy task but the hard work eventually yielded result as Suman along with Sneha managed to take along some women of the village with them. Now the entire village is elated with their success as this short film has taken them to the world stage.