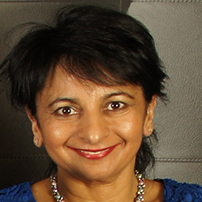 Independent Thinker, Socially Active – in Netherlands India Association, Foundation for Critical Choices for India, WO=MEN, the Dutch Gender Platform. Australian-born as the daughter of an Indian diplomat, Suman lived in various countries in South East Asia before coming to the Netherlands. She started her career in this country as a nurse and worked for several years in the health care industry before making a radical switch to the banking sector in 2001. By now, Suman has extensive work – life experience, mainly in the health care and the financial sector. As a person of Indian origin happily married to her Dutch husband and living in the Netherlands, she has always been interested in both the Dutch and Indian cultures. As a result, throughout the years she has gained extensive experience in event organization, communication, non-profit board management and multi-cultural associations.
Suman works at NIBC Bank where she coordinates and facilitates the management of the Retail Banking SBU. She recently re-joined the Employees Council (Ondernemingsraad) of NIBC after an earlier eight year term as member and Secretary of the Employees Council.
Suman’s interest in becoming involved in civic society and pro-actively work on causes she believes in started more than twenty years ago , when she became a member of the Parents Council in her children’s primary school. Since then, she has been actively involved in both the Dutch and Indian culture via several Indian Diaspora as well as local / Dutch national organizations. Causes she cares about include bridging cultural differences, women empowerment, education and striving to achieve the UN Sustainable Development Goals.
Currently, Suman strives to contribute to these causes in cooperation with four different associations amongst others as Vice President of the Netherlands India Association that has the objective to enhance friendship and understanding between the peoples of both countries. She is also the Public Relations Director of Foundation for Critical Choices for India, a Media spokesperson for the newly formed Indian Diaspora Council and a member of WO=MEN, the Dutch Gender Platform that strives for female Gender Justice, Equality and Empowerment. This is her way to contribute her skills, knowhow and experiences to the causes that she is passionate about.