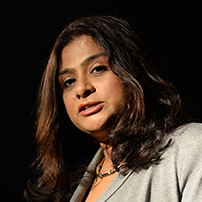 Sujata Sahu is the Founder Director of 17000 ft Foundation, an organization that has been working relentlessly in remote mountainous hamlets across the UT of Ladakh, with a primary objective to enhance education, strengthen the Government School System, and sustain the villages that are facing a desperate migration of young families and children to faraway towns in search of good education.
Sujata has over 25 years of time spent in various leadership roles in corporate IT and as an educator and facilitator working with young children. Having worked in various Indian and American firms to lead their large technology systems, Sujata Sahu gave up her corporate career to move back to India and pursue her passion to work with children. A trekker and an outdoor enthusiast, a particularly difficult solo trek into Ladakh brought home the challenges faced by the people of remote Ladakh which then led her to found 17000 ft Foundation in 2012 to improve the lives of communities there, focusing on bettering the Govt. School Education System in the most remote and ignored of villages of Ladakh.
Frequently mentioned in the media for her work, Sujata Sahu was awarded the prestigious Nari Shakti Puraskar 2015 by The Hon’ble President of India, ShriPranab Mukherjee, an award constituted by the Ministry of Women and Children and presented to her for her work with disaggregated children of Ladakh. She has also been nominated as an Amazing Indian by Times Now in 2013.
She is a TedX and Josh Speaker and speaks at multiple forums to carry the incredible story of a remote, ignored and inaccessible region that she has now brought to the forefront through the power of people and technology.
Twitter: @sujatasahu