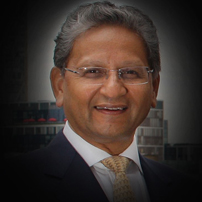 Deputy President of the London Chamber of Commerce

Subhash Thakrar is Deputy President of the London Chamber of Commerce and a Partner at City accountants CBW Blackstone Franks. The firm is a full service accounting firm with specialism in taxation and corporate finance. The firm is also involved in asset management services.
Subhash has increased his focus on Africa recently. In particular, he is working on affordable housing projects in a number of fast growing African countries under the PPP model.
Subhash has extensive experience in advising and doing business in India where he has been a joint promoter of an Equity fund, a Real Estate fund and joint ventures with South African as well as Australian Companies involved in the infrastructure sector. Subhash identified the investment opportunities in India in the early 1990s when India was about to take off as an economy. He now believes that Africa is poised for similar opportunities.
CBW Blackstone Franks has associates internationally under an international group called MGI. The firm was the pioneer in the development of taxation software and is author to over twenty taxation and professional books. Subhash was invited by the London Mayor in respect of his objective to relate to Asian Businesses of London.
Subhash has led other missions for the London Chamber to East Africa and India. He has also participated in the missions led by the Prime Minsters Blair and Cameron as well as Mayor Boris Johnson and the Lord Mayor of London.